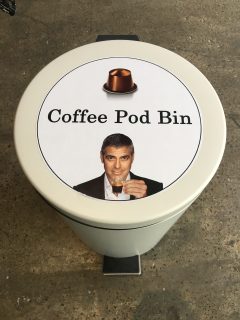 Despite its innocent papery appearance, your disposable coffee cup might be much more sinister than it seems. The ABC’s War on Waste clearly identified take-away coffee cups as a major sustainability issue. Contrary to common belief, they are not recycled. The plastic lining ensures that they almost never make it to a recycling plant (regardless of what bin you put them in). They don’t biodegrade either, so Australia’s astronomical demand for its daily coffee fix means these cups reach landfill in plague proportions. It is estimated that disposable coffee cups are the second largest litter waste product, outdone only by plastic bottles.

Perhaps the simplest solution is reusable cups! The movement is growing in Australia with environmentalists everywhere encouraging co-workers and friends; and some coffee shops offering discounts for customers who bring their own cup. But for those who struggle to remember that cup when they leave home, there are other options.

The BEC team recently decided to do something about our contribution to the disposable coffee cup menace.  As an office Christmas present, we invested in a sparkly new coffee machine. We chose the  Nespresso pod system which delivers a quality caffeine fix with a low environmental imprint (Who knew George Clooney was such an environmentalist?).  So far, the machine has been a huge hit with the team – it has satisfied even the most ardent coffee lovers among us, and has trimmed our disposable-cupped-coffee-consumption almost completely! The aluminium coffee pods that Nespresso uses are entirely recyclable, and they make it as easy as possible for you to send them in. When the used coffee pods are returned, 100% of the aluminium is recycled and the used coffee grounds go into compost. As an additional bonus, George Cloony’s face makes a pretty classy recycling bin!